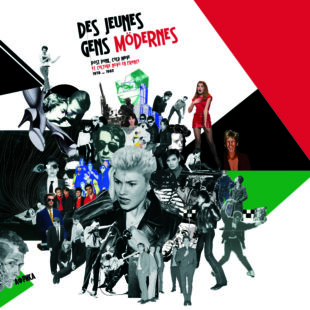 This comp has been released next to the “jeunes gens modernes” exhibition  organised by AGNES B in Paris (3 avril-17mai 2008). This comp explore the french vaults of french post punk, electro pop and french no wave.

Between the late 70s and mid-80s, in the wake of the punk wave and in parallel to other types of music like disco, funk, ska and reggae, a prolific and chaotic music scene began to develop in France, combining the energy of rock and the nihilism of punk with electronic experimentation.

The period was not, on the whole, one of optimism and joy, played out as it was against a background of economic crisis and the cold war. The tendency was rather towards disillusion, accompanied by a clear-sighted recognition that a stalemate between the generations would be unavoidable in the short term.

Paradoxically, as it would appear, a kind of hope and frenzied vitality could also be detected during these years. Both were fed by a sort of modernist utopia, which was sometimes wilfully ironic. This was largely based on a certain fascination with technical progress and, by extension, on a belief, tinged with mistrust, in the infinite perspectives that the new technologies now seemed to offer.

A whole section of France’s youth found itself confronted by the contradictions of the times it was living in: young people were torn between the sensation of living on the edge of an abyss and hope for the dawning of a new world; they were deprived of tangible ideological landmarks but resistant to the posthippy utopias of the previous generation. In search of an identity, they recognised themselves in the dark lyrics, the cold synthetic music and the laid-back attitude of the new groups bursting up all over the country, as much in the provinces as in Paris.

With the benefit of thirty years’ hindsight, the project “Des Jeunes Gens Mödernes” [Modern Young Men] (featuring an exhibition, a book and an audio compilation produced in conjunction with Naïve, as well as a documentary) reactivates this post-punk/novo diskö/French new & cold wave scene, by means of selected works, personal testimonies and documented records. One of the project’s ambitions is to highlight a cross-section of the specific creative diversity of this scene: it does so by engaging with the music it produced, but also with the aesthetics, the attitudes, and the recurring problems that developed in parallel, looking particularly at its relationship to the modern world. So, first and foremost, it is about recreating the atmosphere and spirit of the time through what was most characteristic about it (and sometimes what partook of caricature), rather than making an exhaustive list of what was produced during those years in the style that concerns us. The project also aims to pinpoint the links that exist between that particular scene and present-day artistic creation. Multimedia by definition, the exhibition section thus contrasts various documents, artifacts and original works of the time with recent productions by contemporary plastic artists, musicians and video producers, whose work echoes, in one way or another, this particular sphere of influence of the French underground.

The project’s title refers to an article by Patrick Zerbib, which appeared in the magazine Actuel in 1980. Entitled, “Modern young men love their mothers”, the article is mainly concerned with the Marquis de Sade, Artefact and Jacno, and is really a spoof. We see the members of the group Marquis de Sade, mostly sporting ties, posing demurely with their respective mothers. They are described, as are Jean Ternisien d’Artefact and Jacno, ex-leader of the punk group Stinky Toys, as underground yuppies, immature but gifted adolescents, who tend to be a bit dandyish; they are aesthetes, curious opportunists and above all realists, far removed from the lifestyle of the rockers’ “Sex, Drugs and Rock’n’Roll”, or the punks’ “no future” or the “peace and love” of the hippies.

Although the article does not mention them, one might include in this eclectic musical circle (which is not very clearly identified except for the fact that its representatives all belong to the same generation) groups like Taxi Girl, Marie et les garçons, Electric Callas, Mathématique Moderne, Suicide Roméo, Modern Guy or even Elli (Médeiros) and Jacno, Lio or Etienne Daho.

However, the phrase evoked by the project’s title should only be taken here for what it is: an expression that reveals the spirit of the age. These famous modern young men are in fact hardly more than a pretext, a line of approach through which to delve more generally into the consequences of the punk movement as a major 20th century sub-cultural phenomenon. Punk proclaimed “No Future”: the only thing was, the future was already there, and modern young men had no other choice but to face up to it. On these foundations, the New Wave generation set in motion a vast reconstruction movement; they were completely cured of any hang-ups by the kind of cultural tsunami that had gone before, which, nihilistic and radical, had “flattened” everything in its path.

There was a positive and purposeful attitude underlying this, even if despair and cynicism were never very far away. The phenomenon is very accurately described by Paul Rambali [The Face] or Jean Rouzaud in “New Wave”, the last posthumous work by Jean-François Bizot.

Taking advantage of the “Do It Yourself” method and of provocation elevated to the status of activist strategy (which Punk enabled people to experience as being doubly effective), the New Wave drew upon artistic avant-garde movements from the past (Constructivism, Futurism, Symbolism, Dadaism, socialist realism and so on), as well as literature (Romanticism, science fiction etc.), cinema (New Wave, German expressionist cinema) and the latest technological advances (electronic, robotic, nuclear).

Modern youngsters were looking at the past so as better to see the future and they freely associated retro aesthetics with the most outrageous modernism (note the overuse of the term “modern” at the time) to create a clashing maelstrom of retro-futurism. Drawing on traditional culture as well as the underground subcultures to which various magazines and fanzines gave voice (American counter cultures, endless references to William S. Burroughs, for example, pop art, etc.), the New Wave embraced all areas of creativity together, and built bridges between the different artistic disciplines (music, visual art, designing, literature, cinema…) to an extent never before seen, foreshadowing the contemporary multi media model.