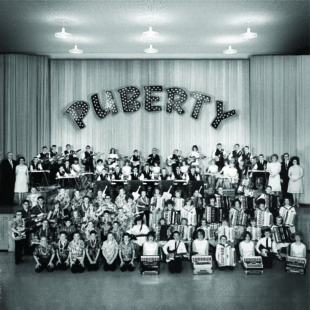 ***Puberty is initiated by hormonal signals from the brain to the gonads.***

Puberty (the band, the lifestyle, the etc.) though, belongs entirely to Susanna Welbourneand Lars Finberg. The band was hatched during a pocket of uncertainty, a time when signals seemed to point toward the half-promised oblivion of this duo’s day-job in The Intelligence, a favorite Whip-Wave unit and guardians of The Underground’s coveted Golden Drink Tickets. During these uncertain 2010 evenings, the tag team launchedTrainwreck, a monthly musical happening held at Seattle’s deepest, dankest karaoke dive, The Orient Express. Dance, dress-up (drag?) and debauchery were of principal concern, with a soundtrack tailored to exalt such values. Guess there’s really something to all of that revolting gonad-signaling after all.

The by-now-trad’ Art-Punk that most would associate with These Intelligence Kids negated their mere insertion as house-band at Trainwreck, so The Intelligence’s assumed influences were swiftly replaced in Puberty by (as confirmed by Finberg) Trainwreck playlist regulars like U-Roy, Tones On Tail, Fun Boy Three, prime sleaze Roxy Music and other grandiose splatterings. This was to be the inverse of what the duo had been doing musically in terms of mood and motivation. The Intelligence’s air-tight guitar jerking delivered with (ahem) casual professionalism was to be largely displaced by big-band arrangements with wildly unexpected turns, delivered via eccentric theatrics and playing upon classically sexual, sultry and moody Rock’N’Roll with odd atmospherics. Plus pink outfits.

***Puberty is the process of physical changes through which a child’s body matures into an adult body capable of sexual reproduction.***

A 2011 single appeared quickly via Canadian label Telephone Explosion, though Puberty’s message was only briefly paraded before The Intelligence’s domination program resumed. More weird hairs started to grow by mid-2015 though, as Finberg and Welbourne resurrected Puberty for a truly wholly album, assembling a wide array of co-conspirators both new and familiar. Perhaps most surprising is that neither plays a single note on the resultant recordings, offering only their vocals (which interplay wonderfully) and songwriting, allowing the band to, as Finberg puts it, “sound like itself”.

That self ends up being a mad provocateur. The album begins with beautiful orchestral fluttering (“Uptown”) and concludes with very LOUD resolve (“Downtown”), tones that bookend a collection of superbly spacious songs that blast through expectation. “Parties” is both awkward and the gospel truth, built upon a simple riff that only occasionally visits the circus. “Nature Calls” boasts a blast of guitar that’s so ridiculously jarring that an advisory should be present. That solo on “Skeletons”?!?!? Hear it, then die knowing you lived a life of true value. “Moonlight” is slinkingly cinematic and impossible to shake. And more, even. Always more.

***In the 21st century, the average age at which children reach puberty is lower compared to the 19th century.***

Oh yeah? Just wait ‘til The Kids hear this one. 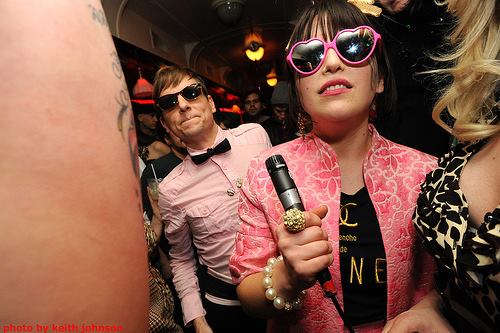